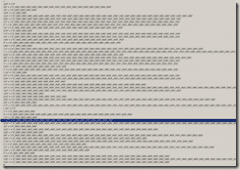 In just the last few days alone I have received 5 support requests from my users about this issue. Seeing that I haven?t seen a lot written about it, I thought I would make a quick post about the Perpetual Annotation Scale List bug in AutoCAD 2008. This issue is most often noticed when users click on the “Annotation Scale” list from the drawing status bar. Generally this list simply contains a list of commonly used drawing scales. On the other hand; if you’re not careful this list can soon be plagued with “_XREF” scales.

What?s happening here is both your host drawing and your reference drawing contain these annotation scales. Suddenly once you attach a couple external references, your Annotation Scale List is virtually unusable. The screen shot above shows one example of this. I write this post with both good and bad news.

The good news is that AutoCAD 2008 Service Pack 1 is said to address the issue. In fact the release notes for the service pack specifically say ?Custom scales which exist in the nested xrefs are no longer duplicated in the host drawing?. Thus the good news is pretty obvious in the way this issue is no longer an issue upon installing the service pack.

Now for the bad news. As I understand things, the service pack will fix the Annotation Scaling Issue moving forward. In other words it will prevent it from happening again, but will not go back and fix the drawings it has messed up. Given my current CAD setup includes Map 3D / LDT / Civil 3D, and a service pack addressing the annotation scale issue hasn?t been released for those products, I have not yet been able to verify that claim for myself.

AutoCAD 2008 users can download AutoCAD 2008 Service Pack 1 from here. Since the straight AutoCAD service pack has been out for a little while now, you can probably expect the vertical service packs to follow shortly. But even still the better question remains ? how do I fix my drawings inundated with _XREF Annotation Scales.

The secret is in the SCALELISTEDIT command. Now be warned, simply typing SCALELISTEDIT at the command line will invoke the graphical version of the command. This version of the command seems to work about 50% of the time. What seems to happen is the buffer for that dialog is exceeded and throws an error if your drawing has too many Annotation Scales. For that reason I have generally opted for a method that, to date at least, has worked 100% of the time.

The sequence of the command will look something like this:

Like many AutoCAD users, we rely heavily on external references, and thus this issue has become incredibly common. For that reason we actually opted to write a quick LISP routine and embed it onto our company Tool Palettes. The is simple enough, and looks something like this: