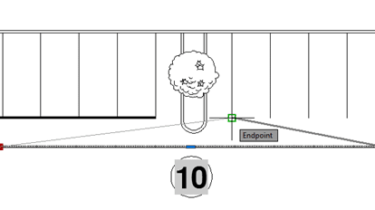 The long list of inquiry tools within AutoCAD provide many ways to approach the task of performing quantity takeoffs on your drawings. Yet as powerful as these tools are, one limitation that has long challenged me is way 1 doesn’t always equal 1 in the context of quantity takeoffs. A common example of this is the need to calculate the number of parking stalls throughout a site. Because of site design elements such as parking islands, it’s likely some stalls will not have a painted stripe separating it, meaning it’s not necessarily possible to get an accurate count by simply calculating the number of paint striping lines in my drawing.

Despite this limitation, one consistent parameter with parking stalls is their width. It stands to reason that an accurate count could be achieved by adding up the length of a parking stall run, and dividing it by the width of a single stall. Interestingly enough, this can be automated using a lesser known Conversion Factor parameter for Fields.

AutoCAD provides an almost infinite number of possibilities when preparing a drawing for plotting. Setting up drawing to plot is like an artist making a reproduction of a painting; the two paintings will look very similar, but they’ll never look exactly the same. This is much like plotting in AutoCAD; you’ll probably find the right combination to correctly plot sheet 1, but reproducing those settings for sheet 2 will likely be a shot in the dark. Even if you do manage to perfectly reproduce those settings for subsequent sheets – how much time did you waste?

You may have seen a quick tips video I filmed for the AutoCAD Exchange with Heidi Hewett where she and I chatted about a solution to this problem – Named Page Setups. Instead of manually configuring the PLOT command for each drawing you produce, why not capture those settings in a way you can quickly and easily apply them to future sheets? This is the exact role Named Page Setups play in every modern release of AutoCAD. Since I could, and well did write several pages on this topic alone in my upcoming book AutoCAD 2011 and AutoCAD LT 2011: No Experience Required, I’ll give you the Reader’s Digest version in this post.

Read moreName That Page Setup and Win (Save) Money 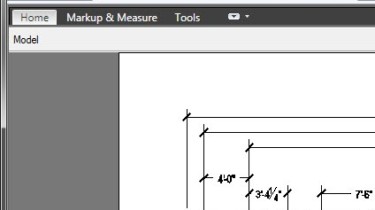 Regardless if you think DWF’s are the best thing since sliced bread, if the person you’re sending the DWF to can’t open the DWF; how great DWF’s are becomes irrelevant mighty quick. In my experience, unless you’re sending a lot of DWF’s to someone, they’re not all that interested in installing yet another piece of software just so they can view your drawings. They’ll simply reply to your e-mail and ask you to send a PDF since they already have Adobe Reader installed on their machine. But did you know Microsoft Windows can open DWF’s without ANY third-party software? All you need is Internet Explorer. Let me explain…

Read moreHow your clients can open DWF’s without downloading anything During my time at Autodesk University 2009 this year, I had the chance to sit down with Heidi Hewett and record some videos for the AutoCAD Exchange.  Among the topics, we discussed were Named Page Setups inside AutoCAD.  Despite their time-saving potential, Named Page Setups seem to be one of those features that’s been in the software forever, and is often overlooked. So if you find yourself overwhelmed with the endless array of plotting options inside AutoCAD, have a look at this quick video.

In the video, I’ll show you ways to capture all the settings inside the AutoCAD PLOT command in a way you can configure the dialog once, and use it again and again. In addition to the time Named Page Setups can save you, they also ensure each of your sheets is setup in exactly the same way; so your title block will plot in the same location on every sheet.

As you may have noticed, there hasn’t been much activity here on The CAD Geek since AU.  The reason for that is quite simply I have been on vacation since December 13.  Today however was the end of my three-week break from the office, and gasp; AutoCAD.  As much as I love to play with and explore the depths of AutoCAD, I must say my vacation was a much needed break from CAD.

But now that I have returned to the office and the holidays are behind us, I shall also return to this, my humble corner of the blogosphere.  I must admit, after taking a 3-week break from AutoCAD it was hard to think up a blog topic, but I remembered a post from August titled “Dynamically Aligning Your Blocks”.  It was with that post I realized how few posts I had about the most versatile  Dynamic Blocks.

It’s a fundamental law of AutoCAD Blocks, blocks shall have an insertion point.  And frankly, this is a good thing.  Sure, AutoCAD needs to know this location so it can remember where you placed the block, but face it – you need this insertion point too.  When drawing blocks we’re taught to place this insertion point in a meaningful location.  Maybe it’s the face of a curb in a civil plan, or a wall in an architectural plan. In addition to presenting my own class (Power to the Parcel), I also had the opportunity to assist 2 sessions of a titleblock lab, and another on dynamic blocks.  During the titleblock lab I helped out with one user asked how the presenter centered his text inside his titleblock field so quickly and easily.  The solution rested solely with the Mid Between 2 Points OSNAP.

Among the comments recently left on The CAD Geek was one asking if I could help them out with a script to sequentially number text.  The solution is perhaps easier than one may think. In fact, chances are, you already have such a tool at your fingertips.  Housed within the infamous Express Tools is a command known as “Automatic Text Numbering”, or for the command line warriors – TCOUNT.

The TCOUNT command has a bunch of hidden secrets contained within it.  Sure, it knows how to count 1, 2, 3, 4, 5, …, but what about 2, 4, 6, 8? Those writing cheers with AutoCAD will appreciate the fact the TCOUNT command can indeed do this.

Beyond that what other tricks does the TCOUNT command have up its sleeve? Well it also has the ability to prefix or suffix your text with a number, or of course replace it altogether. So enough talk, how does one use this hidden gem?

Object Snaps (OSNAP) are among the most fundamental AutoCAD topics I know.  Without them, drawing two intersecting lines can be described as arbitrary at best. A lesser known OSNAP function is this thing called Object Snap Tracking.  Simply put, Object Snap Tracking can reduce if not eliminate the number of construction lines you draw, just to erase moments later.

My post titled “Quickly Link Excel Tables to AutoCAD” from last August continues to be one of my most popular posts to date. As a result I have received a number of e-mails from readers such as you asking about other ways to link Excel data with AutoCAD data. A popular variation has been asking about a way in which you can link Excel data with AutoCAD Block Attributes. Since Block Attributes function much like a database form, it seems logical that we should be able to use Excel as a data source for those Block Attributes. Sadly there is not a true “Link Block to Excel” command (to my knowledge) within AutoCAD. That however does not mean there’s no workaround to the situation!

I originally developed this workaround back in the days before Sheet Set Manager. At the time I was working on a two-part project, each of which consisted of more than 100 sheets. The kicker was that we had to include the station range of the alignment being illustrated on each plan and profile sheet. Of course, as luck would have it, our road alignments were constantly changing in the early phases of design, consequently making our sheet titles incorrect. I thought to myself – there has to be a better way!

After a little digging around I found two Express Tool Commands which caught my eye; ATTIN and ATTOUT. Using these commands in conjunction with one another I was able to export a text file containing my attribute values, bring that text file into Excel to change and manage values, finally importing that text file back into AutoCAD. Admittedly the process is a little rough around the edges, but at the end of the day – it works!

Although each release of AutoCAD translates to bigger and arguably better features one thing has never changed; its malleability. In fact some would argue the malleability of the software as being its best feature. Be it the CUI command, LISP routines, or even VBA and .NET applications. Each of these features is included in the software for one reason – user customization. Even still, LISP and .NET customization can be rather illusive for all but a small minority of the AutoCAD user base.

An Easy Path to Customization

Luckily script customization affords even rookie AutoCAD users a way to automate AutoCAD with endless possibility. While I know the sheer term “Script File” intimidates many, but truth be known, you’ve been writing script files for as long as you have been using AutoCAD. So how is that possible? Well, an AutoCAD script file is really nothing more than a sequence of standard AutoCAD Commands. Thus if you know how to type commands at the command line, you know how to write a script file.

Let’s take a look at how we might create a script file which creates a new layer named C-ROAD-TEXT, sets its color to Yellow, and then sets the layer current.

The LAYER command is among a growing number of AutoCAD Commands which have both a dialog box version and a command line version.  By default, AutoCAD uses the dialog box version of a command.  While this is great for general usage, script files have no way to interact with dialog boxes.  For this reason, we must explicitly tell AutoCAD to use the command line version of a command.  Generally, this can be done by prefixing the command name with a hyphen (-).  Consequently, rather than typing LAYER which opens the Layer Manager Dialog, we will need to type -LAYER.  This will suppress the dialog, and present the entire command at the command line.