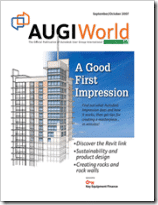 The September / October issue of AUGIWorld is now available for download.  The cover story for this issue is “A First Good Impression”.  Impression is a brand new program that Autodesk released this year which allows you to give your CAD drawings a hand sketched look.  Anyone faced with creating such exhibits and illustrations will definitely want to read this months AUGIWorld.

In addition to the “A First Good Impression” article, there are numerous other articles worth giving a read.  Of those articles is one by yours truly titled “Finding the 3D in Map 3D: Surface Visualization”. AUGIWorld is available electronically by clicking HERE.

During a recent presentation to my local AutoCAD user group (Richmond AutoCAD Manifest) I was presenting the new Plan Production feature within Civil 3D. During the presentation I was asked a rather fundamental, but also insightful question about Civil 3D. The question was simply ?Where?s the 3D part of Civil 3D?? Naturally since Plan Production has to do with the creation of plan sheets, there wasn?t much talk on the 3D modeling components of Civil 3D. On the other hand, an interesting point was brought up.

Answering the question for Civil 3D is simply a matter of demonstrating the Civil 3D road design, surface grading, or even pipe design. Even still the bigger question remains; what puts the 3D into AutoCAD Map 3D? Unlike Civil 3D where just about everything is modeled in 3D, discovering the 3D abilities of Map 3D takes a little more digging around. A lesser known 3D function hidden within Map 3D is its DEM surface rendering and analysis abilities. Quite simply DEM surfaces can be analyzed by elevation, slope, or even slope direction. Moreover AutoCAD Map 3D also has the ability to generate contours from a DEM surface. 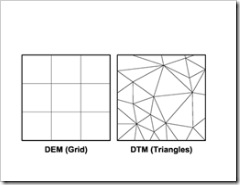 DEM stands for Digital Elevation Model whose literal definition is an interpolated, and continuous surface representing the ground. Another term which is often interchanged with DEM is DTM, or Digital Terrain Model. While the literal definitions of the two are the same, the difference is in their fundamental construction elements. DTM surfaces are built with triangles (TIN – Triangulated Irregular Network), and tend to be a little more accurate than DEM surfaces. DEM surfaces are built using a grid similar to a piece of graph paper. While both are only as accurate as their sources, the malleable structure of a DTM is oftentimes preferred over the rigidly structured DEM format.

While university websites can oftentimes become invaluable data sources, they do not always have everything. Luckily there is a one-stop-shop of sorts available for all USGS Quad Sheet DEM surfaces. A complete index of USGS DEM surfaces can be found by navigating to the GIS Data Depot (www.data.geocomm.com/dem). From there you will be able to both locate and download DEM data. If downloading data from the GIS Data Depot, you will likely need the STDS2DEM utility, which is made available as a free download on their site.

Keep in mind Map 3D only supports DEM surfaces. Consequently you will need to convert a DTM surface to a DEM for analysis in AutoCAD Map 3D. Luckily AutoCAD Civil 3D affords users the flexibility of exporting any Civil 3D surface as a DEM file. Simply right-click the surface name in Civil 3D, and select ?Export to DEM?. The resulting DEM file can then be imported into AutoCAD Map 3D using the procedure outlined below.

Connecting to a Surface 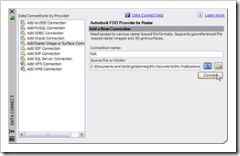 1. Click the ?Data? button from the ?Display Manager Tab?.

3. While the connection name doesn?t directly affect the functionality of Map, it?s considered a good practice to name your connections something logical. Naming a surface after the originating quad sheet is always a good place to start.

4. After browsing to your DEM file, click ?Connect?, and then ?Add to Map? 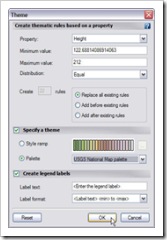 The preconceived notion about surface analysis is that a sophisticated (and pricey) civil design package such as Civil 3D is required. Truth be known, Map 3D also sports an impressive bag of tricks when it comes to visualizing 3D surfaces. Just as Map assigns a random color to a new GIS layers, Map will assign your DEM a random color. At this point your surface is monochromatic, and barely qualifying as a cool picture. That is about to change as you begin to stylize your DEM to render a given scenario.

AutoCAD Map 3D provides three fundamental ways of analyzing a surface; height (elevation), slope, or aspect (direction of slope). In this article we?ll analyze our surface based on its height (elevation). Making the analysis task a little easier are the numerous pre-built themes which ship with AutoCAD Map 3D.

1. From the ?Display Manager? select your DEM surface, and then click the ?Style? button at the top of the Map Task Pane.

2. Pressing the down arrow under the ?Theme? column for Band one will take you to the style editor for your surface.

3. The Style Editor offers the user a number of options including the first option which specifies the analysis to be performed. For this example I have used ?Height?.

Another item of interest may be the ?Distribution? method. This setting is on that oftentimes comes to personal preference, and is safe to try out as you build your visualization.

Next you are given two ways of defining a theme for your surface. Your choices are to either theme your DEM by ?style ramp? (user defined), or ?Palette?. The palette option will likely prove handy when working with DEM?s, as there are a number of pre-defined USGS color schemes.

4. Press [Ok], and then [Apply] to preview your newly themed surface. Tweaks can be made by making adjustments in the Style Editor for your surface.

Finally Map 3D does actually have the ability to create contours for your surface. The option to ?Create Contour Layer? is available by right-clicking your DEM surface in the ?Display Manager?. From the resulting dialog you can specify the location of the topography reference file. A new topography reference will be added to your drawing after pressing [Ok] in the ?Generate Contour? dialog. Being a map reference, the ?Style Manager? can be used to adjust the display and even labeling properties of your contour reference.

Viewing and Distributing Your Surface

For all intensive purposes, your Map 3D DEM surface acts like a 3D object in your AutoCAD drawing. Commands such as the infamous 3DORBIT will allow you to look at your surface from every conceivable angle. Also worth mentioning is the fact AutoCAD Map 3D has a special drawing status bar which provides the option to toggle between 2D and 3D modes. Additionally the Map 3D drawing status bar provides the option to adjust the vertical exaggeration for your DEM surface. The vertical exaggeration tool is especially helpful when viewing a surface with a minimal amount of relief.

Should you choose to distribute your original DWG file, your recipient is going to need more than just the DWG file. DEM surfaces work in the same spirit as external references. Without the DEM file, the person on the other end will not be able to view the surface. Explaining how to configure Map over the phone can be rather challenging. On the other hand Autodesk?s DWF file is extremely portable and even supports 3D. Creating a 3D DWF file can be done in Map by going to ?File > Export > AutoCAD Export?. Select ?3D DWF? as the file type, and save to your location of choice. Now sharing the surface is as simple as e-mailing a single DWF file (or using the online viewer at www.dwifit.com).

Many AutoCAD Map 3D users have thought the 3D tag to be more of a marketing ploy rather than an actual feature they could use. Map 3D features such as the 3D DEM surface analysis is proof the 3D designation is much more than a marketing ploy. Visualization seems to play a more and more integral role in the lifecycle of projects, and anything 3D always seems to impress clients. Better still are the recent advances in Autodesk?s DWF technology. Such advances have made it possible to distribute large 3D surfaces within a small and portable file to recipients without AutoCAD. 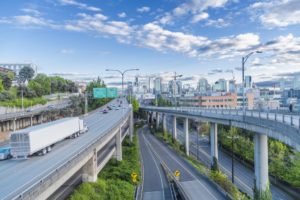 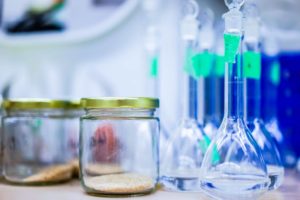