Object Snaps (OSNAP) are among the most fundamental AutoCAD topics I know.  Without them, drawing two intersecting lines can be described as arbitrary at best. A lesser known OSNAP function is this thing called Object Snap Tracking.  Simply put, Object Snap Tracking can reduce if not eliminate the number of construction lines you draw, just to erase moments later.

Let’s take the following example.  Say I wanted to draw the red circle where my 2 blue lines intersect.  In all likelihood – I don’t already have the blue lines drawn, so I am going to start by drawing two intersecting lines (blue lines) 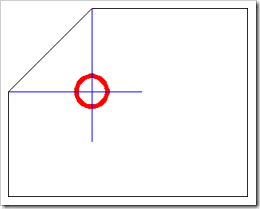 Even though the 2 blue lines didn’t take me all that long to draw, since they are just going to be erased in a matter of minutes – it’s time wasted.  Object Snap Tracking let’s you “draw” disposable lines on the fly.

If you’re like the majority of the individuals I have taught this feature to; chances are – it won’t work the first time you try it.  It will indeed take some practice, but once you get the hang of it….  watch out!!!