While a large number of blocks are drawn with real units, others are purely for graphical representation and well scale dependent. We typically have to illustrate waterline designs on both normal plan sheets (1″ = 50′), and on at least one overall plan sheet (1″=100′). With that we frequently find ourselves copying our waterline valves multiple times to properly illustrate them at both scales. A scenario such as this is where Annotative Scaling for Blocks can truly shine.

Defining an Annotative Block really isn’t any harder to do than defining a normal block in previous versions of AutoCAD. You will still start by drawing the objects you wish to make a block in your drawing, fire up the BLOCK command, and finally select the objects & specify a base point. The addition you will notice is under “Behavior”. Inside of the “Behavior” group we now have an “Annotative” option. To make it so this block can take advantage of the Annotative Scaling options within AutoCAD 2008, check the “Annotative” check box. With “Annotative” enabled (by checking the checkbox), we can tell AutoCAD to automatically rotate the block to match its viewport by checking the “Match block orientation to layout”. I want to keep my water valve blocks rotated as I insert them into my drawing, and thus will keep that checkbox unchecked (as illustrated). 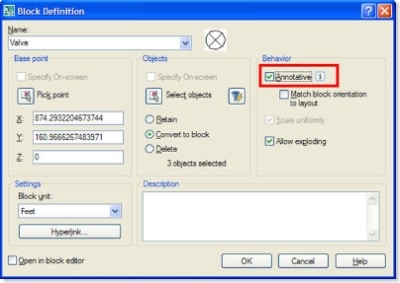 That’s truly all there is to creating a new Annotative Block. But what if you want to convert an old block from a previous release into an Annotative Block? Exploding it and redefining it is what the hourly employees do when they need a few more billable hours. Smart drafters can simply open the BLOCK command. Contrary to popular belief we can actually do more than create new blocks from this dialog. Simply select the name of the block you want to convert to Annotative from the pull down (where you would traditionally type the name of your block). Select the “Annotative” checkbox as outlined above, and hit [Ok]. AutoCAD will prompt you and ask if you want to redefine the block â€“ answer yes, and your block will now be an Annotative block.

Some good news, and some bad news. Blocks can be both Annotative and Dynamic. Unfortunately if you take a Dynamic Block and use the method I outlined above to convert it to an Annotative block, it will make it Annotative, but also strip ALL of its Dynamic Block Actions and Parameters. Also while you can have an insertion point per Annotative Scale (so one insertion point for 1″ = 50′, and another for 1″ = 100′), you cannot assign different visibility states (Dynamic Blocks) per scale. The functionality introduced in AutoCAD 2008 with Annotative Blocks is something I have been looking for inside of AutoCAD for some time now. While I haven’t redefined my entire block library yet, you better bet I am already thinking of how to best use Dynamic Annotative Blocks to make things easier for my users. Surely with a little imagination you too will be able to see numerous opportunities in your shop as well.