The only real change to the Layer Tools in AutoCAD 2007 was where to find them on the menu. Rather than going to “Express > Layer Tools” we had to go to “Format > Layer Tools”. Of the new features in AutoCAD 2008 is the ability to fade locked layers. Users of the Reference Edit (REFEDIT) command will likely find similarities between it and the new layer fading. Those familiar with the Layer Isolate (LAYISO) command are likely confused because the Layer Isolate command isolates selected layers, turning the remaining layers off?

Well my friend, that statement is true of the Layer Isolate (LAYISO) command in AutoCAD R14 â€“ 2007. By default the AutoCAD 2008 Layer Isolate (LAYISO) command no longer turns off non-selected objects, but rather locks them. Illustrated below is the same drawing with the same layers “isolated”. Notice in the AutoCAD R14-2007 example how non-selected layers are not displayed. The AutoCAD 2008 example looks dramatically different, as the non-selected layers have been locked & faded, not turned off. 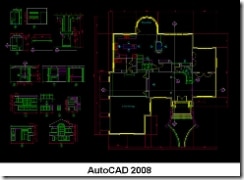