As most know AutoCAD 2008 was released about 2 weeks ago on March 23. Perhaps the most exciting new feature in AutoCAD 2008 is what is known as “Annotative Scaling”. I have often referred to the 2008 release of AutoCAD as the “your wish is now a command release”, and Annotative Scaling is of the wishes that have been made a command. Using AutoCAD releases prior to 2008 it was common to copy text for printing at different scales. A common one in Civil engineering is 1″ = 50′ for design sheets, and 1″ = 100′ (or larger) for overall sheets. Of the challenges of having multiple copies of a single note is keeping each copy in sync with the other when revisions are made.

The idea behind Annotative Scaling is that you can have a single piece of text which will scale itself up or down based on the scale of your drawing. While powerful the concept and use of Annotative Scaling can be rather complex. A number of pieces must come together in order for Annotative Scaling to work properly. The cool thing is, while I will only focus on text, lots of things including blocks can be Annotative. 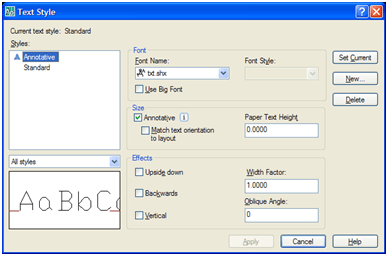 AutoCAD 2008 introduces a new Text Style dialogue. This change is due in part to the introduction of Annotative Scaling. The key to making text magically scale itself is to make sure the “Annotative” checkbox is checked.

For years we have had to calculate the height of text by doing a calculation such as (Plotted Height X Drawing Scale = Model Space Height). In other words if you were working on a 1″ = 50′ drawing and wanted your text to print at a height of 0.1″ you would; 0.1 in. x 50 ft.= 5 ft.. If all of that math confused you, well you’re not the only one. The new Annotative Scaling feature is all about making it so you don’t have to think about anything other than you want your text to plot out at say 1/10″ tall. When the Annotative checkbox is checked the “Height” field changes to “Paper Text Height” (illustrated above). Once again this value is going to be the height you want your text to print out at on paper. You’ll notice I have entered 0.1 in the illustration representing a 1/10″ plotted height. 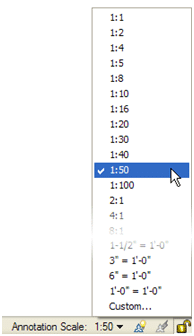 Just as you were beginning to master system variables such as LTSCALE and PSLTSCALE AutoCAD introduces another to us â€“ CANNOSCALE. This new system variable controls how your text will appear in Model space. For instance, if the majority of your plan sheets were at a scale of 1″ = 50′ then you would likely set CANNOSCALE to “1:50”. Assuming you set your Paper Text Height to 1:50, your model space text will be scaled 50x, and consequently appear to be 5′ tall.

If you have taken a look around your AutoCAD 2008 interface you have likely noticed one addition to the Status Bar at the bottom of the screen. These additions have to do with the new Annotative Scaling feature. Instead of typing CANNOSCALE each time you would like to change the Annotation Scale, you can simply click the scale listed on the Status Bar. Clicking the scale will result in a list of available scales being displayed as illustrated to the left. Keep in mind that the Annotation Scale is more or less for reference purposes only. Annotative text displayed in a viewport will be scaled up or down per the viewport scale. Thus it is possible for a single piece of text to be scaled to a height of 5′ in a 1:50 scale viewport, and 10′ in a 1:100 scale viewport.

People who have used AutoCAD Civil 3D in the past will be familiar with the way text can magically scale itself. While Annotative Objects work in much the same way as Civil 3D objects, there are some differences. Figuring out how Annotative Text works can take a little time, but after only a short period of time you’ll find yourself asking “where has this been for the last 21 releases of AutoCAD”. In some future posts we’ll take a look at some of the other things Annotative Text can do.