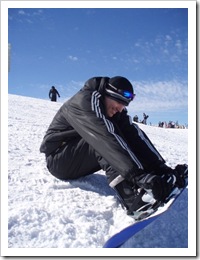 This time last week I was at the beautiful Snowshoe Mountain in West Virginia.  Slope conditions were rather nice for the entire weekend, so myself and the group I was with got some great runs in!  In the evenings when we were not skiing we ended up playing Nintendo Wii.

Of course the Nintendo Wii play almost didn’t happen because yours truly forgot to pack the sensor bar.  Might I add the group I was with consisted of some top-notch geeks, one of which is a programmer.  JJ, the programmer, knew that two candles would do the trick when without a Wii sensor bar.

That introduced problem #2 – we didn’t have and candles!  But one thing we did have was a gas fireplace.  Luckily the LCD TV was mounted above the fireplace, so we were able to use it as our sensor bar.  Admittedly it didn’t work as well as a real sensor bar would have, but it worked good enough to make the system useable.

So now that you know how to play MacGyver with your Wii, how about a real AutoCAD tip?!?!

Bringing All Text to the Front

Those who use WIPEOUTs have likely had text accidentally hidden by the WIPEOUT itself.  What must be done in such a case is each piece of text must be brought to the front.  Doing this and hunting down the suspect pieces of text can be quite tedious, but wait there’s a command for that…