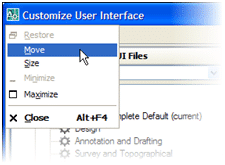 Hopefully everyone had a wonderful Memorial Day weekend. I know the long weekend was a welcome retreat for me. Of course the flip side to the long weekend is that I returned to the office thinking today was Monday. Now that I am back on course with what day of the week it is I can finally make another post. Keeping with the spirit of my last post, tips & tricks, I will share with you one that nearly stumped me the other day.

Over the last several years we have first witnessed the evolution from CRT monitors to the newer and sleeker LCD monitors. Of course the new LCD monitors left many CAD users to ponder what ever to do with the newly discovered desk real estate once occupied by the gargantuan CRT monitor. For many the answer was simple â€“ more monitors. And so as fate would have it multiple LCD monitors has started to become a common sight throughout many engineering firms. While there is no arguing multiple monitors makes many tasks much simpler, they do introduce some tech support issues that until recently were uncommon to encounter.

Of these issues has to deal with disappearing task panes and the like. Just last week I had a user trying to get into their CUI command. Waiting for a while the user never had the CUI command appear on their screen, and they couldn’t do anything in AutoCAD afterwards. After taking a closer look at things I finally figured out the CUI command was indeed loading, it was just loading outside the view of the users monitor. With the issue identified I began thinking, and recalled that Lynn Allen made a post a few months ago about various task panes disappearing after plugging her machine into a projector. Long story short I was a little miffed when I found her blog post, only to read her solution involved loading the CUI command. Still stuck I pressed on, finally it dawned on me that when I right-click on an applications name I get a small menu; which happens to include an option to Move the screen placement of a said application.

Such a revelation was only but so helpful as I couldn’t move my mouse over to the CUI so that I could right-click the dialog box and move it. Finally I figured out the keyboard shortcut to right-click on an application (or dialog box), consequently accessing the move option. The answer was not in the right-click button on the keyboard, but rather pressing Alt + Space at the same time. Pressing that sequence allowed me to select “Move”, and finally get my users CUI command back.