As Published in the March/April 2007 AUGI World Magazine

Somewhere in the lifecycle of nearly every project there will come a time where quantities must be calculated. Regardless if they are a part of a review agencies requirements, or in-house needs insuring your project isn’t over budget â€“ calculating quantities is quite simply no fun. Granted base AutoCAD offers some impressive tools to automate calculating the number of blocks inserted in a drawing, but still what about linear features such as lines arcs and polylines? Calculating the total linear feet for each diameter of waterline in a project could easily take hours using commands such as PEDIT and LIST. At the end of it all you kick back in your chair and say to yourself â€“ there has to be a better way? There is in fact a better way, and it is found within Autodesk’s Map 3D software package. Using Map 3D it is possible to calculate linear quantities in a matter of minutes as opposed to hours. Making such a time savings possible are Map 3D’s topologies. By design topologies are technically a GIS tool, but with a little imagination they can be quickly made an engineer’s best friend.

By definition topologies are a set of geometric connections between objects. While the definition may be a little cryptic, if one takes a moment to think about it, nearly everything illustrated in a set of engineering plans falls into this category. Take for example a waterline design. The numerous pipes (objects) will be assembled together (geometric connections) to ultimately construct a complete water system. Using a “Network Topology”, statistics (including length) for such a waterline system can be calculated in a matter of minutes. Autodesk’s Map 3D allows for three distinct topology types; node, network, and polygon. The different topology types mirror the different ESRI shapefile types of point, polyline, and polygon. Which topology to use will be determined by what type of entities you are working with. In our case we’re interested in calculating the total length of waterline in our design. For linear features such as waterlines, a network topology is best suited for our scenario.

Although individual entities can be selected and added to a topology, breaking items such as your 6 in. and 8 in. waterlines onto two separate layers will streamline the creation of your topology. While it may seem elementary, taking a quick moment to insure no extraneous linework is contained on your layer(s) to be calculated will of course insure an accurate quantity. Taking a couple extra minutes to structure your drawing as outlined above from the beginning will make up to the minute quantities possible during your next design charette.

Similar to AutoCAD in the way it makes commands available in numerous ways, topologies can be created in one of two ways; using the Map Explorer in the Map Task Pane, or by working through the Map menu itself. Although both methods have their advantages, to keep things as simple and concise as possible this article will work through the Task Pane. 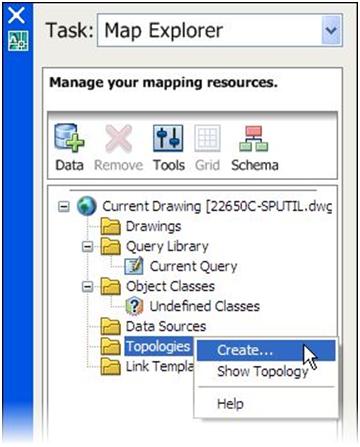 
An interesting fact about Map 3D is the way most Map commands have the ability to function in a textual command line based interface. Consistent with most standard AutoCAD commands, prefixing the command with a hyphen “-” will suppress its graphical dialogues, and inherit a command line only functionality. Most humans will of course prefer the graphical dialogues. On the other hand, by using the command line, regularly calculated linear quantities have the potential to be automated with a script. The two Map 3D commands used in this article were: MAPTOPOCREATE and MAPTOPOSTATS. Adding a hyphen to the â€“MAPTOPOCREATE command will allow a topology to be created from the command line. It’s important to note the command prompts for the MAPTOPOCREATE command are not in the same order as the dialogue boxes are. The command line version of the command asks for nodes to be selected first. Nodes were not used in our scenario, and thus can be skipped over in the command line version of the command. Be sure to add linear entities as links when using the command line. Unfortunately there is no command line equivalency of the MAPTOPOSTATS command. Although the command cannot be controlled from the command line, it doesn’t make knowing the command a worthless bit of trivia. Typing MAPTOPOSTATS (without a hyphen) at the command line will result in its graphical dialogue being launched. Tagging this command at the end of an automation script would still guide a user in the right place, allowing them to quickly calculate a linear quantity. It’s no secret; the engineering design process is very iterative. Despite that known fact clients rely on design teams to provide accurate and up-to-date take off’s to insure their project is on budget. Municipalities are also traditionally eager to know these same quantities for purposes of budgeting future maintenance costs. Regardless of who the quantities are being calculated for, up to the minute quantities can now become a reality. Although the topology tools are more focused towards GIS, they can prove invaluable on the engineering side by saving both time and money.