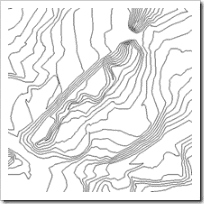 Perhaps one of the most common GIS related tasks I am asked to help with is how to import and then elevate GIS contour data.  Oftentimes this data is provided as an ESRI Shapefile, and when imported has no elevation.  While GIS contour data isn’t accurate enough for precise design, it is often sufficient for the purposes of preliminary analysis or broad design considerations.

While the details of course vary depending on the data source, all GIS contour data generally share some fundamental similarities. Of these is the concept elevation data is encapsulated within a one of the data fields of your shapefile.  Elevating GIS contour data can be summarized in two parts; importing the data, and elevating the data.  Unfortunately these two parts cannot be done concurrently, and instead must be done separately.  In this, the first of a two-part posting, we will look at how to import GIS data as AutoCAD line work into a drawing.

Some things to note about this process.  First, you are actually importing the data into your drawing, not linking to it.  What that means is if your GIS data source ever changes, the data we import will not update.  While my focus will be on importing contour data, this process will work for any ESRI Shape file.  Something like contour data doesn’t traditionally change all that often, whereas parcel data is generally changed daily.  Thus like anything, there are advantages and disadvantages to this process that you will need to evaluate.

We will start by importing your GIS contours into a new drawing.  Since contour drawings tend to be somewhat large (in file size), I traditionally separate my existing contours and existing site features into two drawings.  This helps be keep my individual file sizes as small as possible, and so for purposes of this tutorial, I will follow that practice.

Once AutoCAD Map 3D finishes processing your data, you will have GIS contours as AutoCAD polylines in your drawing.  As stated at the beginning of this post, each of these lines will have an elevation of 0.  While the elevation of the line itself is 0, viewing the properties of any line will list the elevation.  That value was imported from the SHP file data.  Even still, being able to reference the elevation is only but so helpful.  In part 2 I will discuss how we can have AutoCAD Map 3D elevate a line based on it’s associated GIS data.