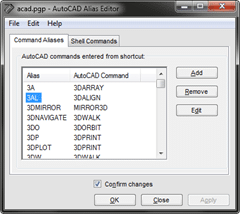 As much as I love the enhancements to the ribbon inside AutoCAD 2010, I have a slight confession to make. I hardly click buttons, navigate menus, or even browse the ribbon to launch many of my most used commands. Instead I revert to a simpler time before such user interface enhancements – the keyboard. Call it archaic, but with minimal effort, you too can become an AutoCAD keyboard warrior! How you ask? To find the answer you need to look no further than the beloved Express Tools.

AutoCAD veterans are probably familiar with modifying the acad.pgp file.  For the uninitiated, the acad.pgp is really just a text file containing all of the command aliases used within AutoCAD.  For instance, there’s no L command inside AutoCAD, but you’ve probably used it to draw a line at one point or another. The entering L at the command line lets you draw a line is because the alias L is mapped to the LINE command. While AutoCAD ships with L mapped to the LINE command, with the help of the acad.pgp file you’re free to change it to anything you want.

Making things even easier (by putting a graphical interface on the acad.pgp file) is the Command Alias Editor Express Tool. With just a few clicks you can add, remove, or edit any of your command aliases.

To Edit an existing alias

Let’s say you want to remap the LA alias (LAYER command by default) to CLASSICLAYER.

Let’s say you want to create an alias LLI to launch the LAYISO command.

And that’s it! With a little imagination you can quickly conjure up all sorts of two and three character shortcuts to your most common commands.