Not too long before the launch event for AutoCAD 2010, Shaan Hurley made a post on his blog “Office AutoCAD Pranks”. Shaan’s post ended up being the topic of discussion for one of the more candid conversations the bloggers Autodesk invited to San Francisco had.  I don’t need to tell you what can happen when you gather a bunch of bonafide AutoCAD geeks in the same room.  Needless to say, the pranks we dreamed up ranged from harmless to all out cruel.  In the spirit of April Fools Day I thought I’d share some of these pranks with you the readers of The CAD Geek.

Now, before we begin, some of the pranks you’re about to read may get your fired from your job.  Unless you really want to give your boss a darn good reason to fire you, please use your common sense before actually performing any of these pranks!

Embed messages into the ACADDOC.lsp file.

ACADDOC.lsp gets loaded for every drawing.  Put something like this in the victims acaddoc.lsp file, and wait for their reaction.

(alert “Autodesk has detected usage that is in direct violation with the license agreement for AutoCAD 2009.\n\nYour system configuration and usage statistics have been sent to the anti-piracy division of Autodesk.\n\nAutoCAD 2009 will now close.”)
(command “_close”)

Create a GROUP of the entire drawing

It’s been my experience few people know about the GROUP command inside AutoCAD.  It’s intended use was to be a cross between a normal drawing object and a block.  Nonetheless, the following command sequence will make it so every object in their drawing highlights when they select just a single object

To have even more fun with this prank, when the victim calls you over to their computer to take a look, press Ctrl + H real quick.  This will toggle groups off, so you can then select objects individually.  Before you leave the victims desk, press Ctrl + H to turn groups back on.

AutoCAD will place a + everywhere you unsuspecting victim clicks. The “blips” will stay until he/she runs a REGEN.

Turn on and shrink the LIMITS of your drawing

With the processing power of today’s CAD workstations, LIMITS is a largely forgotten command.  Nonetheless, when turned on, a user cannot draw anything outside the drawing LIMITS.  Thus if you do something like…

Make the cursor color and the background color the same

A black background + black cursor = one freaked out user. 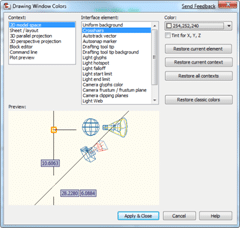 To play this prank go to the Display tab within the OPTIONS command.  Click on the [Colors] button. Find the Crosshairs Interface Element, and set it to whatever the background color is.

Display EVERY toolbar known to AutoCAD

To pull this incredibly cruel, but rather harmless, trick enter the following at the command line:

Be sure to use the hyphen to execute the command line version of the TOOLBAR command.

Thank goodness fixing this one is as simple as restoring your favorite workspace.

Erase All, and SAVE twice

If this one doesn’t get you fired, it darn well should!  At the command line:

Keep in mind the BAK file is always 1 version behind the DWG.  Thus by saving twice the BAK and the DWG will be the same. Before trying this one Open resume.doc, Print…

Set SNAP to something ridiculous and turn it on

To pull this prank:

Turn off the MTEXT formatting toolbar

A lesser known system variable is MTEXTTOOLBAR.  When this bad boy is set to 0, your victims MTEXT Toolbar will never display (until they find this blog and set it back to 2)

By default when you go to place a piece of MTEXT you get “abc”.  Change the MTJIGSTRING system variable and it can be anything you want (so long as it’s less than 10 letters).

Save all BAK files to the Desktop

Everyone loves Express tools, especially when they can be used in a fun little prank.  Within the Express Tools arsenal of commands is one named MOVEBAK.  Set this to say the path of your victims desktop, and watch their desktop fill up with a BAK file for every DWG they save.

Hide everything but the Drawing Window

Pressing Ctrl + 0 will hide everything but the drawing window (including menus/ribbon).  Ctrl + 0 won’t hide the command line, but Ctrl + 9 will.

Move a common dialog off the screen

Open  a common command, press Alt + Spacebar.  You’ll get a little sub-menu with the option to Move the dialog. Use the arrow keys to move it off the screen.  To make AutoCAD remember the location, use the Enter key to exit the dialog.

Have a great prank of your own that you would like to share?  Post it in the comments of this post, and let your fellow The CAD Geek readers die in laughter this April Fools Day, and make those who don’t know about The CAD Geek wish they did.