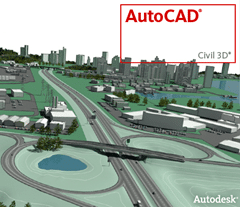 Ever since Microsoft launched Office 2007 the trend has undoubtedly shifted from the traditional interface employing menus and toolbars, to the “new and improved” ribbon. Users of vanilla AutoCAD got ribbonized with last year’s 2009 release. While a classic workspace was still shipped with the product, the ribbon was an integral part of the default workspace. On the other hand, Civil 3D users got a stay of ribbonization in the 2009 release, but 2010 is a whole different story. You guessed it; the 2010 release of AutoCAD Civil 3D has been ribbonized!

Many of you have probably launched “AutoCAD Civil 3D 2009 as AutoCAD” at least once since installing it. Under that configuration, you got the full ribbon experience! If you were like me, you took a look at it, thought eh’ that is cool, and proceeded to change back to the AutoCAD Classic workspace. Here’s the deal, the ribbon in 2009 was cool, but not overly useful (in my own opinion). I personally felt Autodesk ribbonized AutoCAD just so they could be like every other software manufacturer, following in the footsteps of Microsoft. To be fair, I can certainly see how the Ribbon might help someone first learning AutoCAD.

I really have to give it to the folks up in Manchester, NH (where Civil 3D is created). They did not just slap a bunch of commands on a ribbon, and wish us users the best of luck. Instead, they did their homework, and put together a comprehensive array of ribbon tabs & panels. Things like create alignment, profile, parcel, and the like are right where they belong – the Home tab.

Now if that’s too hard, Civil 3D also harnesses the full power of a feature new to AutoCAD itself – the contextual ribbon. With the contextual ribbon, all one has to do is select the alignment they want to modify. AutoCAD will take care of the rest, presenting you with a contextual Alignment Ribbon Tab. Housed within the Alignment Contextual Ribbon Tab are things like the Geometry Editor, Design Criteria Editor, even a launch pad to create a profile if you wish. How awesome is that!

Again, I was optimistic about the ribbonization of Civil 3D, but after having the chance to experience it for myself, it’s actually quite helpful. Generally, I find it extremely easy to locate the tools I need when I need them. Still, the commands I cannot find are often just an object selection away. I select an alignment, and AutoCAD automatically displays the tools I need thanks to the new contextual ribbon feature. Well done Autodesk, well done.