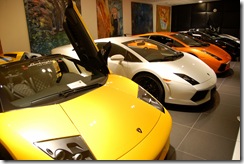 Today marked the official start to Autodesk University 2008, and boy what a busy day! For me my morning got started being a lab assistant for Andrew Hill of AEC Systems in Australia. In that class he presented his “Project-Based Title Blocks using Fields, Attributes, and References”.  Andrew certainly had a lot packed into his class, but I must say it was all very awesome content.  Looking to the stats of this blog, among my most popular posts of all time is Update Block Attributes Using Excel. If you’re an AUOL member be sure to find Andrew’s class and download it’s content.  Among the goodies in his dataset is a LISP which updates attributes using Excel.

After my morning wakeup lab, it was off to the AUGI Volunteer Meet & Greet.  Since my lab conflicted with the event, I barely made it in time, but made it nonetheless.  Seems like there was a good showing of volunteers, which is always a good thing.  After all, without volunteers like you AUGI cannot be the organization it has become today!

The AUGI Volunteer social ran directly into the General Session, where once again Autodesk did not disappoint. No we didn’t get the 360 degree “digital city” that we experienced at last years AU, but that’s not to say the session wasn’t impressive.  Perhaps among the most impressive elements of the presentation was the full-size motorcycle “printed” using a 3D printer.  I can only attempt to describe it as absolutely stunning.  Unfortunately I didn’t have my camera with me, so I’ll have to grab a shot of the motorcycle from the exhibit hall.

While I didn’t have my camera with me, I did have my BlackBerry armed with twitterberry.  From it I did live “tweet” the entire General Session.  If you haven’t already, be sure to check out my twitter feed. Lynn Allen opened the stage once again this year.  No Lynn didn’t pitch www.lynntroductions.com this year, but certainly laid a foundation for another impressive general session.

Carl Bass (Autodesk CEO) then took the stage where he opened by discussing “The Gallery” .  The gallery is a new exhibit in San Francisco that highlights some of the brightest designs created using Autodesk software.  On the stage today were a number of items from The Gallery.  Carl spoke about a number of them including the “Cathedral of Light” c created by SOM Architects, a robot created for the First Robotics competition, even a hollow core surfboard created by 42 Surfboards.  Each were undoubtedly brilliant in their own right.

Before turning the mic over to Tom Kelley, Carl spoke about Pecha Kucha nights, and even mentioned the fact the 3rd Annual AU Pecha Kucha Night would be hosted at this years AU.  From there the General Session’s keynote, Tom Kelley took the stage.  The premise of his keynote was simple – innovation.  Speaking of the many paradigms we are each experiencing in our respective industries he mentioned the Red Queen Effect. More-or-less the Red Queen Effect is “we’re running but we’re not getting anywhere”.  In today’s market it’s not good enough to be running, we must run twice as fast to continue being innovators.

I personally found his part about Anthropology to be quite intriguing.  When presented with a new design challenge, Tom doesn’t go straight to the drawing board, but rather to observe.  The example he used was kids toothbrushes.  For the longest time kids toothbrushes were simply a smaller version of adult toothbrushes.  Shorter & smaller handle to accommodate the smaller hands of kids.  The logic certainly made sense, that was until he observed kids brushing their teeth.  He found that most kids hold their toothbrush with a fist.  Consequently. based on this observation it made more sense to design a kids toothbrush with a thicker diameter handle.  The end result was one of the best selling kids toothbrushes ever. I liked his quote, “The real act of discovery consists not in finding new lands… but in seeing with new eyes”.  Frankly it seems so elementary, but is so often overlooked when designing.

There was a lot more discussed during the general session, take a look at my twitter feed for a full synopsis of the event.

With the conclusion of my final class, it was straight off to the blogger’s social.  I had the chance to meet many wonderful bloggers; R.K. McSwain of CAD Panacea, Beth Powell of Beth’s CAD Blog, of course the infamous Shaan Hurley of Between the Lines, and many more.

I wasn’t there for the opening of the exhibit hall, but rather off at another event at Dal Toro’s.  It proved to be a wonderful event where I was personally able to have a number of very beneficial conversations with other professionals.  I think the most intriguing of which was a conversation about migration.  It was with a Revit user, but at the end of the day the fundamental challenges Revit users are having are strikingly similar to us Civil 3D users. Much like the general session illustrated, today we are immersed in the infancy of what has become known as Algorithmic Design.

Although I wasn’t able to make it for the opening of the exhibit hall, I was able to make it there before it closed.  Ended up visiting the Engineered Efficiency booth, where Rock Band for the Wii was the focus of the evening.  I’m not sure of the musical talents of the other guys at EE, but can vouch for Eric Chappell and his talents with his favorite band Rush’ music.  Somehow I don’t think the Wii is as difficult to play, but still worth the entertainment value.

Well it’s yet another very long day tomorrow, so I think I will call it a night.  Hopefully I’ll get the chance to meet many more of you guys in the coming days!