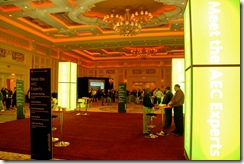 So Autodesk University 2008 doesn’t officially get started until tomorrow (Tuesday).  That small detail didn’t get in the way of some very cool sessions and gatherings from being hosted. For me my day got started at the Richmond International Airport, for a quick flight to New York (JFK).  My layover was only supposed to be long enough for me to get from one gate to another, but as “luck” would have it – my flight from JFK to Las Vegas was delayed for about an hour.  Better late than never, I finally made it to The Venetian (host hotel for AU 2008) just in time for the AUGI Community Leadership Conference.

Well respected individuals such as Robert Green took the stage to discuss what it takes to run and manage a successful Local User Group.  LUG’s are of course at the heart of AUGI, and so there were lots of good tidbits to be gathered during the session.

A very apparent theme of this years AU is to make the conference more environmentally friendly.  Unlike years past, session handouts aren’t blindly distributed at registration, but rather at the classes their self.  Also session evaluations will not be done via scantron, but rather electronically. Some may have noticed the bank of computers upon registering.  From there you will be able to submit your session evals.  And as if saving the environment wasn’t cool enough, submitting your eval will enter you for a chance to win a number of free trips to AU 2009!  Definitely worthwhile.

Finally, I concluded my evening at the BIM Mixer.  All industries were included, and I think everyone there was able to engage in some very good conversation with other industry professionals. Tomorrow is the official start to AU 2008, so stay tuned!  Of course you can follow me at AU this year via twitter where I am live “tweeting” this years conference.  Likewise you can see a twitter mashup of everyone tweeting the conference here.