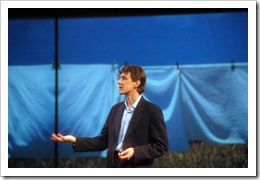 I actually arrived in Vegas yesterday (Monday).  Thankfully most of the post Thanksgiving travelers had passed, but Monday was still a pretty busy day to travel.  Naturally the rain throughout the eastern US didn’t help matters.  All things considered I presume my 1:30 delay in New York wasn’t all that bad.

I had planned to make an AutoCAD Civil 3D Power User Bootcamp, scheduled for Monday.  Unfortunately my flight delays resulted in me missing that session.  No less I was able to fill my Monday afternoon meeting numerous individuals, getting checked in, and the like.  Monday evening played host to what ended up being a rather informal meet and greet for My Feedback Users.  Autodesk’s My Feedback Program serves as the stage for its Beta testing program.  Anyone is welcome to submit an application to join the My Feedback Program.

This morning of course marked the official opening to Autodesk University 2007.  The opening, or General Session as they call it was a rather impressive display of what the future of Autodesk products look like.  Since there are more than 10,000 of us AU’ers here this year, the session was held in the round with everyone looking to the center of the venue.  Surrounding the entire room was more than 20 projection screens which served as the medium for one of the most immersive demos I have ever seen.  Using some yet-to-be-released technology, a full 3D model of Washington DC was displayed on the screens surrounding the audience.  Despite announcing it during the General Session, I am sorry to say Lynn Allen lied to us, www.lynnintroductions.com does not exist.  **Update**  Lynn didn’t lie to us, the URL is actually www.lynntroductions.com, and simply forwards to her blog. Perhaps Autodesk will launch the Lynn Allen introduction site in the same spirit as www.SaveTheMarkers.com.

With Autodesk University officially open for business, classes begun immediately after the General Session.  Apparently the first session I registered for, Demystifying Label Styles Within AutoCAD Civil 3D, was incredibly popular.  By the time I got up the escalator, and to the classroom, the session was already at capacity. Disappointed, I went on a quest to find another open session, but was unsuccessful.  Thankfully that was the only real glitch to my day.  My other sessions went off extremely well.  In fact a special thanks to J.C. Davis, Nick Harper, and Craig Parkinson for their presentation, DEA Path to AutoCAD Cvil 3D 2007 Migration.  Later in the day Icaught Scott McEachron of D|C|CADD Dallas’ presentation, Essentials of Roadways – Corridor Design.  Both presentations were packed with lots of useful information.

While the breakout sessions were incredibly informative, the real highlight of AU Day 1 was the AUGI Annual Meeting.  Much of what AUGI does is not always readily apparent to the masses.  For instance in the last year AUGI has expanded its footprint to include many new regions worldwide.  Additionally the CAD Camp program has also gone international.  As a result AUGI membership has excelled to new heights.  Being an AUGIWorld Columnist it was especially neat to see how AUGIWorld is now translated into many languages.  Now if I could just learn to speak all of them! 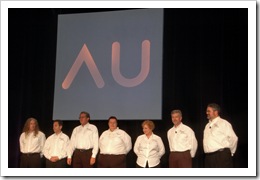 The AUGI Annual Meeting does have one very valuable takeaway – the official 2007 AUGI Beer Bust Beer Mug.  Upon gathering my beer mug I made my way downstairs to take part in the AUGI Beer Bust.  Having a chance to speak to many of the exhibitors yielded lots of great insight and information.  Actually meeting the entire Engineered Efficiency (EE) crew was rather nice.  Before tonight I only knew most of them through e-mail. EE is the group behind the ever popular Civil3D.com Blog.  If you don’t subscribe to their blog, well just go do it – you can thank me later!  But seriously the EE team is a great group of individuals who have also recently completed their book titled “Mastering Civil 3D 2008“.  I have been working my way through their book, and so far can’t say enough good things about it.  If you’re a Civil 3D user, you need their book.

The Autodesk Labs exhibit definitely had the cool factor mastered.  So much I was looking for the “Beam me up scotty” booth next to it.  One exhibit was simply a monitor mounted to an arm, which was mounted to a pole.  You could walk around the pole, moving the screen up and down to see a car rendered in real-time.  Another cool exhibit was the largest touch screen I think I have ever seen.  Quite simply you could revolve around a machine part by touching the screen.  I didn’t manage to get any photos tonight, but will have to get one sometime this week.