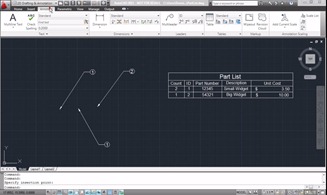 Anyone who follows me on twitter got a heads up about this post yesterday. Ever since its introduction in 2008, Excel table linking has been one of my favorite features inside AutoCAD. Likewise, it seems I’m not alone with that notion, as my posts discussing AutoCAD and Excel interoperability are consistently some of my post popular posts here at The CAD Geek. Another one of my personal favorite features inside AutoCAD are Data Extraction Tables. The idea is that you can get AutoCAD to create a dynamic table from the information contained inside your drawing or drawings (yes Data Extraction tables can work with multiple drawings – very cool).

My post titled “Quickly Link Excel Tables to AutoCAD” from last August continues to be one of my most popular posts to date. As a result I have received a number of e-mails from readers such as you asking about other ways to link Excel data with AutoCAD data. A popular variation has been asking about a way in which you can link Excel data with AutoCAD Block Attributes. Since Block Attributes function much like a database form, it seems logical that we should be able to use Excel as a data source for those Block Attributes. Sadly there is not a true “Link Block to Excel” command (to my knowledge) within AutoCAD. That however does not mean there’s no workaround to the situation!

I originally developed this workaround back in the days before Sheet Set Manager. At the time I was working on a two-part project, each of which consisted of more than 100 sheets. The kicker was that we had to include the station range of the alignment being illustrated on each plan and profile sheet. Of course, as luck would have it, our road alignments were constantly changing in the early phases of design, consequently making our sheet titles incorrect. I thought to myself – there has to be a better way!

After a little digging around I found two Express Tool Commands which caught my eye; ATTIN and ATTOUT. Using these commands in conjunction with one another I was able to export a text file containing my attribute values, bring that text file into Excel to change and manage values, finally importing that text file back into AutoCAD. Admittedly the process is a little rough around the edges, but at the end of the day – it works!

Script files seem to be one of the many forgotten frontiers of AutoCAD.  “Back in the day” I knew of many CAD users who couldn’t go a day without running a script file or two.  These days – not so much.  Even still, the trick of yesterday can still help solve many tedious and mundane tasks today.

Since being posted back in April my post titled Linking Excel and AutoCAD with Data Links has been one of the most visited pages here on The CAD Geek Blog. In that post I go through what I will call the manual way of linking an Excel table to AutoCAD. Thus unless you are a part of the Slowskey family, you’ll likely prefer this quicker more efficient way of making the link.