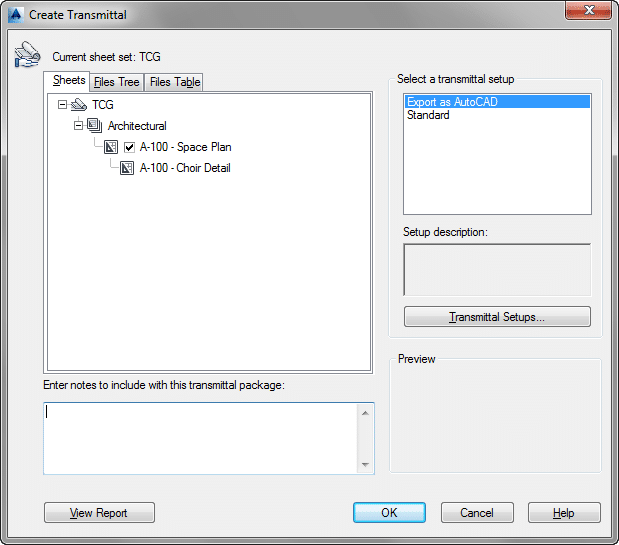 With the many resource files necessary to display many AutoCAD drawings, sending your DWG files to an external consultant can prove to be a challenging endeavor. Of course this was the very reason Autodesk introduced the ETRANSMIT command to AutoCAD many versions ago. Although the ETRANSMIT command isn’t the most complex command in AutoCAD, it does have it’s share of settings for you to specify.

If you use the ETRANSMIT command with any frequency, there’s a good chance you’ve discovered the ability to create what AutoCAD calls a Transmittal Setup. These are a great little tool that will let you recycle your eTransmit settings drawing after drawing, and can be a real time saver if you exchange a lot of drawings. Unfortunately, while AutoCAD provides a way to save Transmittal Settings, the ETRANSMIT command will not let you share them across your company for the purposes of standardization.

Although the ETRANSMIT command does not provide a way to distribute your Transmittal Setups, the Sheet Set Manager functions provide an interesting workaround to sharding standardized Transmittal Setups across your organization. To accomplish this: 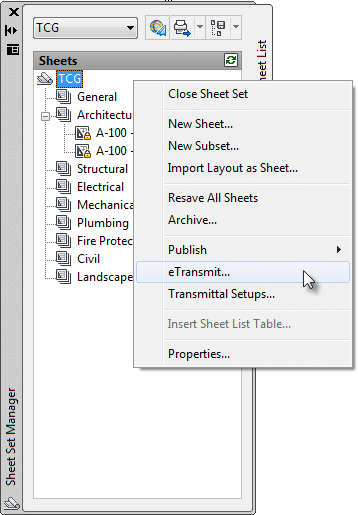 Hatches help us assign context to specific elements of our plans by adding texture to what would otherwise be a flat engineering document. As the “paint bucket” tool of AutoCAD, inserting hatches isn’t especially difficult, however they do come with one simple rule. You can only hatch closed areas, and if the area you select isn’t closed AutoCAD calls you names with the following notification:

On any given day, you probably come across several instances where the area you need to hatch is open, and thereby disqualifies you from using the HATCH command until you add some temporary linework your drawing to “close” the area. The interesting this is it doesn’t have to be this way, as it is possible to hatch open areas using the lesser known “Gap Tolerance” function of the command.

In the above example I have a series of rooms I would like to hatch. As any good room should, each of these rooms has a door leading into them. To work around this, you could draw a temporary line to close the door opening, and then erase the line after you draw the hatch.  Although this method works, it does add several steps to what should otherwise be a simple task of drawing a hatch.

An alternate approach is to apply a Gap Tolerance to your Hatch by doing the following:

By utilizing the Gap Tolerance setting I was able to hatch each of the offices in my floor plan even though the door opening made these open areas.

AutoCAD provides an almost infinite number of possibilities when preparing a drawing for plotting. Setting up drawing to plot is like an artist making a reproduction of a painting; the two paintings will look very similar, but they’ll never look exactly the same. This is much like plotting in AutoCAD; you’ll probably find the right combination to correctly plot sheet 1, but reproducing those settings for sheet 2 will likely be a shot in the dark. Even if you do manage to perfectly reproduce those settings for subsequent sheets - how much time did you waste?

You may have seen a quick tips video I filmed for the AutoCAD Exchange with Heidi Hewett where she and I chatted about a solution to this problem - Named Page Setups. Instead of manually configuring the PLOT command for each drawing you produce, why not capture those settings in a way you can quickly and easily apply them to future sheets? This is the exact role Named Page Setups play in every modern release of AutoCAD. Since I could, and well did write several pages on this topic alone in my upcoming book AutoCAD 2011 and AutoCAD LT 2011: No Experience Required, I’ll give you the Reader’s Digest version in this post. 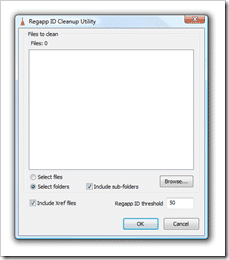 So you have this drawing, and despite clearing our your Annotative Scale List, running the PURGE command, even clearing out your layer filters the gosh darn drawing is still slower than a herd of turtles stampeding through peanut butter.  And even after all of that, your drawing is still 1 MB in size – what gives?

The issue is most likely due to these little things known as regapp ID’s which can lurk in a drawing and substantially impact drawing performance.  The term regapp is actually short for registered application.  The basic premise of these so called regapps is a connection is made between AutoCAD and some external applications (ie AutoLISP, ObjectARX, .NET, etc).  When this connection is no longer needed, a regapp of that former connection is retained inside the AutoCAD DWG database.

Removing RegApps from a Single Drawing

If you type –PURGE at the command line, you can then specify R for RegApps.  Finishing the command will subsequently remove these unecessary objects from your drawing.  Now save and watch your file shrink!

The above method is great if all you have is a couple drawings to purge the RegApps from.  Autodesk recently posted a Regapp ID Cleanup Utility which will allow you to remove these pesky things from multiple drawings at once.

Autodesk began shipping many of their 2009 products starting Monday. Among those released is their flagship product, AutoCAD 2009. If you just can’t wait until your subscription shipment makes its way to your doorstep, a fully-functioning 30 day trial can be downloaded from the Autodesk website. As I have said in some previous posts, the big new feature in AutoCAD 2009 is more-or-less the user interface (UI) as a whole.

Just about every red blooded AutoCAD user I have ever met has first asked “How do I use XYZ Feature?” After they learn how to use XYZ feature, their next question is “How do I customize it?” Last month I gave a quick how to with my “Introduction to the AutoCAD 2009 Ribbon”. This month, we’ll take a look at customizing the new AutoCAD 2009 Ribbon. At first glance, the Ribbon may seem like a brand new cryptic monstrosity at the heart of new release. Good news is the “all new” Ribbon isn’t really all that new afterall.

Although each release of AutoCAD translates to bigger and arguably better features one thing has never changed; its malleability. In fact some would argue the malleability of the software as being its best feature. Be it the CUI command, LISP routines, or even VBA and .NET applications. Each of these features is included in the software for one reason – user customization. Even still, LISP and .NET customization can be rather illusive for all but a small minority of the AutoCAD user base.

An Easy Path to Customization

Luckily script customization affords even rookie AutoCAD users a way to automate AutoCAD with endless possibility. While I know the sheer term “Script File” intimidates many, but truth be known, you’ve been writing script files for as long as you have been using AutoCAD. So how is that possible? Well, an AutoCAD script file is really nothing more than a sequence of standard AutoCAD Commands. Thus if you know how to type commands at the command line, you know how to write a script file.

Let's take a look at how we might create a script file which creates a new layer named C-ROAD-TEXT, sets its color to Yellow, and then sets the layer current.

The LAYER command is among a growing number of AutoCAD Commands which have both a dialog box version and a command line version.  By default, AutoCAD uses the dialog box version of a command.  While this is great for general usage, script files have no way to interact with dialog boxes.  For this reason, we must explicitly tell AutoCAD to use the command line version of a command.  Generally, this can be done by prefixing the command name with a hyphen (-).  Consequently, rather than typing LAYER which opens the Layer Manager Dialog, we will need to type -LAYER.  This will suppress the dialog, and present the entire command at the command line. 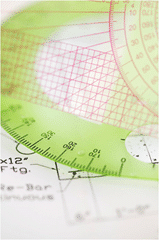 Just this evening I received an e-mail from Autodesk letting me know my AU Unplugged session "The Training Trinity: Fundamentals of a Successful Training Program" was accepted.  Thank you to everyone who voted for my session.  If you're attending AU, be sure to check out the AU Unplugged Schedule.  There you will find the full list of, and information on each of the AU Unplugged sessions.  I do look forward to meeting some of you guys!

Throughout the years, I have seen both high and low-tech ways of inserting AutoCAD DWG's into Microsoft Office documents.  I believe the most low tech way I have seen included printing each the MS Word file, and the AutoCAD DWG, then using Scotch Tape to insert the DWG onto the printed document.  Run it through a photocopier, and no one will ever know (unless you were a messy Scotch Taper).  But what do you say we jump into the 21st century?

Staying in the 21st century, AutoCAD does actually provide us with a fair number of options for inserting AutoCAD DWG's into MS Office documents.  Although a Ctrl + C (Copy) and Ctrl + V (Paste) will work, it will insert your AutoCAD DWG just as it looks in AutoCAD - including the black background.  My guess is you would rather have it look similar to the way your DWG plots? 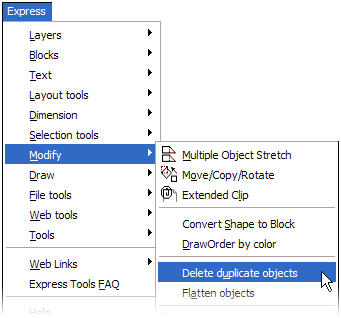 On a somewhat frequent basis I get a call from a user desperate to rid their drawing of the plethora of duplicate objects that in one way or another has plagued their drawing. There is of course the grueling method of individually selecting each duplicated object and running the ERASE command, but surely there is a better way. A better way does of course exist within the beloved "Express Tools". Among the modify commands contained within Express Tools is "Delete duplicate objects". Personally I find that terminology to be boring, and thus I normally type the command “OVERKILL". Yes, a likely top ten contender for most comical command names is the OVERKILL command. 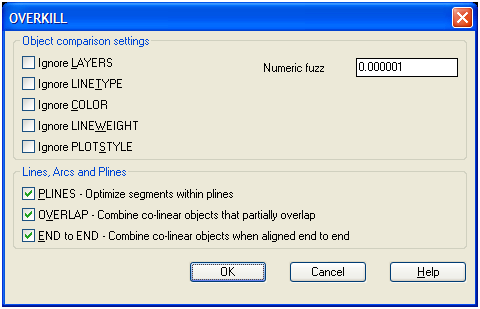 The Help file provides a pretty comprehensive explanation on what each of the options do. Personally when I run this command I like to keep all of the "Ignoreâ€¦" checkboxes unchecked, and all of the "Lines, Arcs and Plines" options checked (as illustrated). Traditionally the default "Numeric fuzz" works for me, but if I have a really bad drawing I will up its value. You have likely used the saying "Close enough for government work", well the numeric fuzz is like that. Upping its value will allow the OVERKILL command to combine objects that are further apart.