Design Review – Beyond the DWF 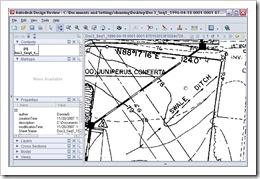 Those who use DWF’s have likely used Design Review.  It’s electronic markup functionality is quite impressive.  We have a few project teams who have lived by it since the DWF Composer days (when you had to pay for it).  In February of this year Autodesk discontinued its DWF Viewer product, making Design Review FREE – and who doesn’t like FREE?

No less, the relationship between DWF’s and Design Review are overly apparent.  A lesser known ability of the software is it’s image handling capabilities.  By changing your “Files of type” in the “File > Open” dialog, you can open; BMP, CAL, GIF, JPG, PCX, PCT, PNG, TIF, and a few others.  One open the images behave much like a DWF file would.  You can quickly and easily pan and zoom throughout the image.

I hope everyone has a wonderful Thanksgiving.  Safe travels to everyone attending AU.  I shall look forward to meeting a number of you in Vegas!

6 thoughts on “Design Review – Beyond the DWF”